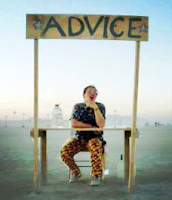 Anecdotes and advice are everywhere; always flying off of plenty of lips. I have a few friends in various stages of starting companies, and they're soliciting my advice on various topics. I spoke in front of the Tech Stars for a Day crowd the other day to impart some of Gnip's experiences, and share some of my perspective. Gnip had a board meeting yesterday wherein advice and perspective flowed around the room. Being on both on the receiving end, and on the giving end, of advice and anecdotes these days has me thinking about advice in general (including any conveyed in this blog post), and its worth.

If it's not already obvious, advice is almost purely context sensitive. If I tell you that highly compressed bike tires will make you go faster, yet you're climbing rocks on a very sandy/steep hill on a mountain bike, you will fail. You needed the surrounding context that I was talking about a road bike on a flat concrete surface. Without that context, my advice was worthless (still may be, but you need as much context as you can gather). Anecdotes from a banker about how fly a plane, probably aren't very useful. So, my first piece of advice is that if you're looking for some, make sure its from a relevant person, who's context and experiences you have a good understanding of. You need to know who's dispensing the advice in order to distill the parts that will be useful to you.

Anecdotes from people who have failed are more valuable to me than those who have succeeded. Note I said "anecdotes" and not necessarily advice. In my world, success is primarily a function of luck, so successful people going on and on about how "they do it" is boring and has a higher probability of being wrong. If you want perspective you can use from someone who has repeatedly demonstrated success in a field relevant to you, you have to engage in a deeper conversation with them in order to get better context.

Rules will kill you (yes, even that one). I've distilled my own set, but I always cringe when I find myself conveying some of them to others; when I become "that guy." We all do it, it's natural, but also hypocritical; ahh the wheel of life. "Never look back." "The only way to pull that off is to..." etc. The very things we strive to find, concrete, definitive, clear, statements about "how," are the very things that are usually wrong.

In the end I've found that I'm able to do my best, and have the most fun, when I immerse myself into a context (e.g. building software): its people, its leaders, its successes, its failures, its history, its future; its context. There are no shortcuts. Success is never easy. Steep yourself in the context you want, don't fake it.

I also try to experience as many life contexts as I can. I would be bored out of my mind if all I did was focus on a single context. Perspective on your main context, from within the context of another place, is crucial. Your context isn't the only one that matters, and frankly, it's probably the wrong one, however so slightly off it might be. Context shifts allow you to course correct your perspective from the outside.

There you have it, a pocket full of worthless advice.
Posted by jvaleski at 5:51 AM


Feel free to surf to my web-site :: pillole dimagranti

Does your blog have a contact page? I'm having trouble locating it but,
I'd like to send you an email. I've got some recommendations for your blog you might be interested
in hearing. Either way, great website and I look forward to seeing it grow over time.

I'll right away grasp your rss as I can't in finding your email subscription hyperlink or e-newsletter service.
Do you have any? Please permit me understand so that
I may subscribe. Thanks.

Hello! I know this is kinda off topic but I'd figured I'd ask.
Would you be interested in trading links or maybe
guest writing a blog post or vice-versa? My website discusses a lot of the
same topics as yours and I feel we could greatly benefit from each other.
If you're interested feel free to shoot me an e-mail.
I look forward to hearing from you! Great blog by the way!