Exits; You're Doing It Right

Email ThisBlogThis!Share to TwitterShare to FacebookShare to Pinterest
When it comes to startups, the notion of "exit" is key. You take big risks, often with high dollar amounts of other people's money, and as a result, everyone wants big returns ("exits"). The old exit path (now just a statistical anomaly) was going public (the quintessential use of other people's money); but the IPO market has dried up. IPOs have been traded for acquisition as the next big exit vehicle. As we all know, acquisitions are 50/50 at the end of the day. They can provide good liquidation for folks in the acquired firm (and associated financiers), but from a longevity standpoint, they're track records aren't great. Over the past year, there have been two great exits/acquisitions for a couple of TechStars Boulder firms. While the dollar amounts might not be where we all dream, the downstream effects of these transactions are admirable.

Occipital
Occipital sold off one of its products (not the team... not the company mind you) to eBay, just a few months ago. What's awesome about this is that the team stands independent. They continue to churn out cool products, with their own culture, on their terms. Spinning out a single product for sale is brilliant (and relatively rare); well done guys.

Filtrbox
Filtrbox sold itself to Jive Software at the beginning of the year. I was a bit skeptical where this would wind up, but I've watched Jive pour resources into Filtrbox, and solidify their offering around Filtrbox's core competencies; so cool to watch.

All right in Boulder's backyard.

Feelin' It In Boulder

Email ThisBlogThis!Share to TwitterShare to FacebookShare to Pinterest
In the "counting my blessings" category, I've been trying to build a blog post about things I'm super excited about these days. That's resulted in delay, so instead I'm just going to do a random splattering of bullets.
Happy.
Posted by jvaleski at 9:33 PM No comments:

I was lucky enough, and honored, to be a part of a luncheon in Boulder today with Congressman Jared Polis, and a great sample of Boulder's startup community. There were roughly 30 of us around a table at the staple "The Kitchen" restaurant. 20 entrepreneurs (~10 from software firms, and ~10 from bio/pharma (a few "other")), 7 Venture Capitalists, and 3 associated with Congressman Polis. Five things struck me.
The dichotomy between #1 and #2 had me thinking... why? Software isn't physical, nearly all other industries are. As a result, the essence of a product is intangible. Physical goods based industries (e.g. bio/pharma) produce something physical, with physical impact, and that took physical goods to produce. Something gets shipped over borders (customs/tariffs are related to the physicality of the good). Something can be counted. Something can be physically examined. Software on the other-hand is relatively complex, and often its value is simply polymorphic in nature. Software is a relatively new industry, and perhaps we'll see it "over regulated" in the years to come, but I thought the degree to which the "other guys" in the room were dealing w/ regulation to be rather intense. 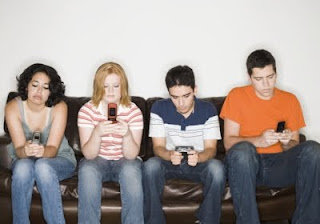 I used to scoff every time I'd see a group of kids walking down the street talking/texting on their mobiles. How could they consider themselves friends when they're not even communicating with each other!?! However, I've found that my own addiction (as well as those of my immediate family members, to variable degree) to little machines hasn't led to the demise of my relationships (from my point-of-view at least). In fact, in some ways I'm closer to those around me than I ever have been. I have a theory around this. When our intellect is focused on/in the machine, our instinct regarding those physically around us kicks in, starts reading cues, and takes over our physical expression without our intellect getting in the way. Put another way, when I'm focused on a task, I don't have time to over analyze the relationships playing out around me. Those relationships either innately work, or they do not.

If I'm in a room with people who fundamentally aren't compatible with me, and I'm busy on a device, on a subconscious level I'll reject them over time, and spend less and less time with those people (or person). Without the device, my consciousness is on the front-line of engagement with others, and we all know how messy things get when we sometimes over-think things. We justify bad relationships, we talk past each other, we rationalize things we shouldn't, etc.

I've always considered whether or not you can sit with someone else in a car on a long drive, and not say a word for miles, as a good judge of compatibility. If either party is compelled to fill the dead air with words simply "because," then things are probably weird on some other level.

I'm not suggesting intellectual communication is bad; far from it. Without it, we'd lack storytelling, much/most education, most relationships would never start, debate couldn't happen, decisions couldn't be made; life and evolution couldn't happen. I am however saying that we're not going to spontaneously combust because the network penetrates further and further into our lives.

As a parent of two children under 8 years of age, I grapple with what is "too much" use of something digital (books, movies, shows, music, games, youtube, email). In my house you're not allowed to bring machines to the table for a meal (when we're eating at home; restaurants are excepted). You're not allowed to fall asleep with a machine. If someone wants your undivided attention, you give it to them immediately (pausing whatever you're consuming/playing with), without hesitation. That latter rule is important to me. The moment one is unable to intellectually/instinctually switch from non-human, to human interaction, we're in trouble.

In this post I've consciously avoided the whole debate around the use of radio waves to keep all our little machines aptly connected to the network, and whether that's good or bad for civilization at the end of the day. That's another post.

Embrace and adapt. In the words of Bob Dylan, "the times they are a changin'."
Posted by jvaleski at 1:11 PM No comments: