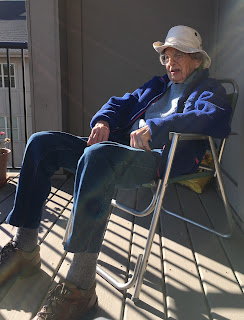 You may think this is a post about my unbelievable Aunt (102) who cooked a meal for me, has all (every single one) of her whits about her, cracks jokes, remembers everything, is surgery free, lives independently in her own apartment (within the retirement community), does all her own care-taking, dresses herself in activity appropriate garb (going out to dinner, going out to the lake, ladies' luncheon, etc), can see just fine (glasses), can hear just fine (speaking up a little bit helps though), and who has found a way to hold on to her lengthy past, while being progressive and modern in her present self. But, this post isn't about her.

I spent four days amongst people on the other end of life's spectrum; some observations.


Living there for a few days while visiting Aunt Kay was an amazing experience. I got a glimpse of the other side of our life arc. It wasn't sad or necessarily scary. It was a handful of days that just "were" and where everything just "was." All of our little circumstances had long since fallen away, and everyone was in this band of time out of time, existing.

Makes me wonder what the hell all of us in the middle are doing. Also makes me want to live life to the fullest, while I can.
Posted by jvaleski at 6:07 AM