Twitter, Apple & The Most Profound Namespace Network Effect Since The Dawn Of Man

Email ThisBlogThis!Share to TwitterShare to FacebookShare to Pinterest
I've blogged about my feelings regarding the utterly dismal state of authentication on the network, and client-side, today. It's a pain we've all, sadly, just accept. It's also a pain that will soon, partially, go away on iOS devices, and could ultimately go away across the network at large. How you ask? Read on.


iOS Single Sign-On
Everyone's talking about the power of Twitter and Apple's native single sign-on model in iOS 5. While this is a phenomenal coup for both Twitter and Apple, it's only the tip of the iceberg. Having a widespread, networked, account namespace (Twitter) baked in at the operating system level is one of the few things that can truly revolutionize the network again. The splintered efforts on Android devices to accomplish this are well... splintered and therefore the network effect is hobbled; oh the power of owning the software, and the hardware. There is only one condition that has to be met, and it's a big one; though logical.

JavaScript navigator Object
I usually don't talk about client-side JavaScript object model modifications because they're mundane, typically small tweaks to existing functionality, and frankly just very rare. One of the more interesting, and only, ones in recent memory was navigator.geolocation which allows a web-page to consult the client/browser for geo-coding information in order to tailor the user's experience to their "current location." Extremely powerful.

Enter Twitter single sign-on, native JS user objects (e.g. navigator.user), and iOS Safari. I'd be surprised if iOS 5's Safari ships with this, but I believe it ultimately will deliver some incarnation of it. Imagine writing JavaScript that can determine whether or not the viewer is already logged into the client, and if so, access their username. Client-to-web single sign-on achieved! Never again will a web-app have to ask me for a username and password, just like iOS apps that leverage Twitter's namespace for single sign-on won't.

Precedent
While very large social networks have had client-side software installed for years (AOL Instant Messenger for example), and some experimentation around this model has occurred, this is the first time the mobile use case, a widely used social network, and a widespread browser have come together with single sign-on precedent being set across iOS apps natively. The next step is to bridge this into web-apps, and I believe Apple will make this leap with Safari, and that Twitter will gleefully be the namespace upon which it takes place.

Google has hinted at Chrome OS/Chrome Browser single sign-on native integration as evidenced by a checkin Lee Mathews noticed in Chrominium awhile ago. I wonder if iOS5 will push Android Chrome hard in this direction.

New World Order
Even without navigator.user, the native single-sign support between Twitter and Apple in iOS 5 is going to change usability forever more. I can't wait for it to trickle into the network and web-apps. We've needed this for 15 years and it's going to be awesome to watch this evolve over the next several.
Posted by jvaleski at 6:46 AM No comments:

Social Graph Overlap After A Week With Google+

Email ThisBlogThis!Share to TwitterShare to FacebookShare to Pinterest
After one week of Google+ being in the mix, here's my reaction to where my "friends" are. This doesn't attempt to say where engagement is. 99% of my "engagement" with "friends" on Facebook is with a tiny set of FB friends. It does say that nearly everyone I'm related to via Circles in Google+, is a Twitter follower or vise versa. 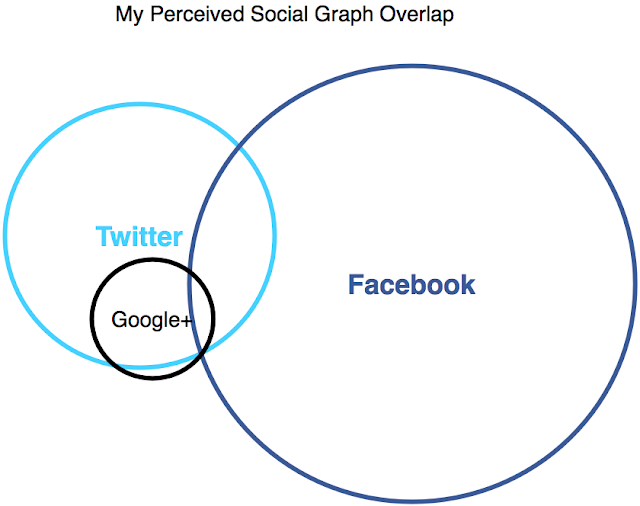