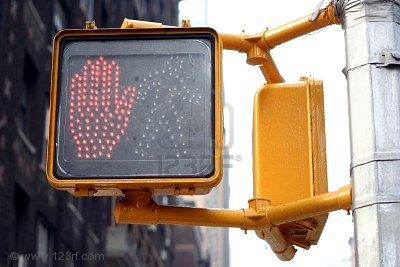 I just got back from Tokyo, Japan where walk/stop signals on the streets are strictly adhered to. That fact sparked up the age-old conversation here in the US around adherence to these signals while raising kids. As parents, do we adhere to the letter of the law all the time, or as pedestrians do we cross the street with our kids when a pedestrian signal says "stop?"

When my son was about four or five years old I "jay walked" with him for the first time. Prior to that we had been obeying the pedestrian signaling without question (nice and easy). It happened early one Sunday morning while walking around downtown. There weren't any cars around, and we were standing at a traffic light with the pedestrian signal indicating "Stop." I stepped into the street to cross with his hand in mine. He said "daddy, the hand is up!" I replied "yes it is," and we kept walking.

A long conversation ensued in which I tried to explain my departure from previous behavior, how what mommy and daddy had been telling him to-date was no longer valid (you're getting older and streetwise now, so the childish, simple, rules we've been applying aren't as relevant anymore), what "the law" meant (the state works to protect us with generic rules that work most of the time), what discretion meant (as humans, we are autonomous sentient beings that make our own decisions based on certain circumstances), what idiocy meant (we were standing at a clear intersection in the off hours of the day without any cars in sight, staring at a mindless red hand strapped to a pole telling us to "stay put"), what independence meant (there are times we take matters into our own hands), what risk meant (by doing this, we were clearly breaking the law and we could be ticketed for doing so. also, if we're not careful, we could dull our awareness to the protection that the law provides, and walk into a busy street at some point in the future; putting ourselves and others in danger), what peripheral vision meant (if you see movement out of the corners of your eyes, identify it and evaluate it before walking into a street), and what responsibility meant (we'd have to humbly accept the consequences of breaking the law if we were caught).

Needless to say it was a nearly impossible conversation to have with a child, that stemmed from a conceivably simple act of crossing the street. I felt it was crucial and necessary however. Life does not work by adhering to all of the rules all the time. There are times when we take risk to accomplish the things we want, and to be who we want to be. There are times when we know better than the system.

I've since had the conversation and "crossing" moment with my daughter. We have thoughtful, aware, and generally (we cross the street when we're not supposed to sometimes) law abiding children. We DO NOT have blind rule followers that stop and go through life like zombies lacking an understanding of the world around them.

We've been breaking this law with discretion for years now, and we'll continue to do so. We have, thankfully, been accident free (incident free for that matter). My kids are highly aware of their surroundings when out in the world; other people, cars, trucks, alleys, crosswalks, street lights, etc.