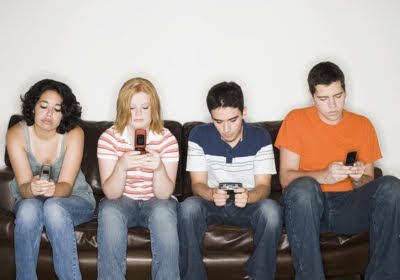 I used to scoff every time I'd see a group of kids walking down the street talking/texting on their mobiles. How could they consider themselves friends when they're not even communicating with each other!?! However, I've found that my own addiction (as well as those of my immediate family members, to variable degree) to little machines hasn't led to the demise of my relationships (from my point-of-view at least). In fact, in some ways I'm closer to those around me than I ever have been. I have a theory around this. When our

is focused on/in the machine, our

regarding those physically around us kicks in, starts reading cues, and takes over our physical expression without our

getting in the way. Put another way, when I'm focused on a task, I don't have time to over analyze the relationships playing out around me. Those relationships either innately work, or they do not.

If I'm in a room with people who fundamentally aren't compatible with me, and I'm busy on a device, on a subconscious level I'll reject them over time, and spend less and less time with those people (or person). Without the device, my consciousness is on the front-line of engagement with others, and we all know how messy things get when we sometimes over-think things. We justify bad relationships, we talk past each other, we rationalize things we shouldn't, etc.

I've always considered whether or not you can sit with someone else in a car on a long drive, and not say a word for miles, as a good judge of compatibility. If either party is compelled to fill the dead air with words simply "because," then things are probably weird on some other level.

I'm not suggesting intellectual communication is bad; far from it. Without it, we'd lack storytelling, much/most education, most relationships would never start, debate couldn't happen, decisions couldn't be made; life and evolution couldn't happen. I am however saying that we're not going to spontaneously combust because the network penetrates further and further into our lives.

As a parent of two children under 8 years of age, I grapple with what is "too much" use of something digital (books, movies, shows, music, games, youtube, email). In my house you're not allowed to bring machines to the table for a meal (when we're eating at home; restaurants are excepted). You're not allowed to fall asleep with a machine. If someone wants your undivided attention, you give it to them immediately (pausing whatever you're consuming/playing with), without hesitation. That latter rule is important to me. The moment one is unable to intellectually/instinctually switch from non-human, to human interaction, we're in trouble.

In this post I've consciously avoided the whole debate around the use of radio waves to keep all our little machines aptly connected to the network, and whether that's good or bad for civilization at the end of the day. That's another post.

Embrace and adapt. In the words of Bob Dylan, "the times they are a changin'."